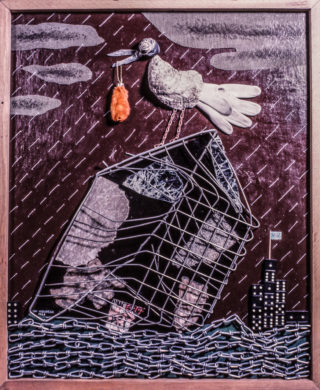 A year after creating “The Hunt #1,” Hirshman returned to surrealism with “The Flood,” complete with a roof-bound bird carrying a rabbit’s foot for luck from its beak. The collage may be a reference to the Book of Genesis, in which Noah, on his flood-floating ark (although there are no pairs of animals here), sent out birds for a reconnaissance flight to see if the deluged land was drying up.

There is another unframed rendering of “The Flood,” probably a first version, exactly the same, except for less “stitched” rain and more objects in the swept-away house – including a Camel pack, a Pepsi Cola bottle cap, etc. – possibly removed as too much “compositional” clutter. Both versions have a cartoon character (Noah?) in a desperate call for rescue shouting “E-L-P,” – Help! – (perhaps of Cockney origin due to the phonetic dropping of the “H,” sound) .