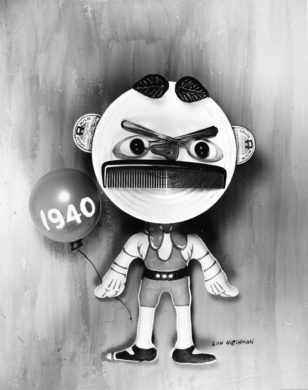 In 1940, Thomas E. Dewey was a candidate vying unsuccessfully to be the Republican choice to run against Franklin D. Roosevelt, the US president who would go on to win his third term (Dewey would later lose two attempts to become president). The New York City prosecutor had a reputation as a tough state’s attorney for going after the Mafia, referenced by Hirshman’s use of a blow-up muscle man doll for his body. Less appreciated by modern viewers of this lesser-known work is Hirshman’s choice of “Grade A” milk bottle caps for ears – Dewey was also known for investigating racketeering in the milk industry.