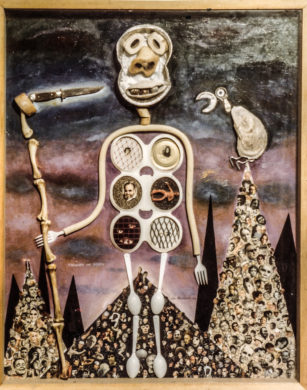 While the “Triumph of Death” theme has been a title used by artists through the centuries, no interpretation was ever anything like Hirshman’s 1974 piece – a Sergeant Pepper-like backdrop of the famous, replacing the Beatles with the Grim Reaper in the foreground. This image (unfortunately of low resolution), includes a Who’s Who game of identification in a pyramidic cornucopia of the well-known and not-so-well known. Even the Reaper himself embodies the image of Orson Welles in Shakespearean guise.