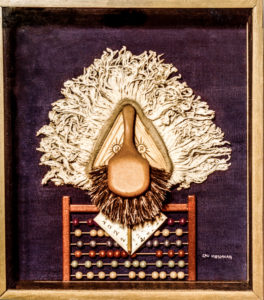 This 1940 caricature of Albert Einstein was purchased by the Philadelphia Museum of Art in 1977.

Upon entering Lou Hirshman’s Philadelphia row house in the mid-1970s, a first-time guest was bemused by the livingroom walls where several artworks hung. He had heard Hirshman was a local artist of note – but not specifically of caricatures and collages fashioned out of everyday objects: Albert Einstein with a wild mop of hair; duelers locked in the crossed swords of a child’s scissors; a psychiatrist staring through framed glasses of handcuffs. “I know what you are,” the visitor remarked, turning to Hirshman. “You’re a sophisticated junk collector.”

While intended as sarcasm, that observation captures the heart of the art of Lou Hirshman.

As the child of a poor Jewish printer who had immigrated from Russia to the US soon after his son’s birth in 1905, Hirshman sailed later with the rest of his large family, arriving in 1909. In his teens, he began studying art, first trying his brush hand at serious oil painting. After a brief foray into avant-garde filmmaking, he shifted to painting caricatures. This developing skill caused a minor flap in the press when a ballerina, incensed by an unflattering likeness in caricature, tore up the piece and slapped him in the face. 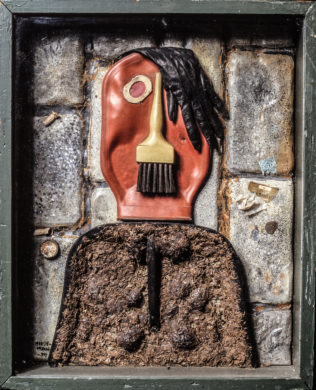 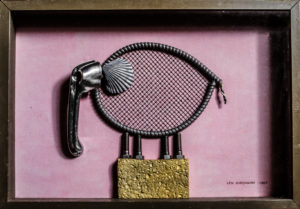 His public persona as the faculty director a prestigious evening art school administered by the Philadelphia Museum of Art was balanced by his daytime, almost monklike, life sequestered in a studio where he communed with creations that were instilled with what one could term “insightful” humor. It was not jokiness. His was the satire of the Mark Twain-ian school, an observationalist whose reflections were mirrored not in a twist of the verbal, but the tweak of the visual. Where others saw things, he saw forms. His was not a world of words. Hirshman spoke in shapes.