HOW A CARICATURE LED TO THE INVENTION OF THE PULL TAB

A detail from Hirshman’s “Three Ducks” showing the use of pull tabs.

In 1962, an engineer and struggling inventor with the unlikely name of Ermal Cleon Frazer went on a picnic with his family. A secret alcoholic, Frazer had brought a six-pack of Budweiser but forgotten a can opener. In frustration, he began stomping on the cans, salvaging only a few drops of his beloved brew. As he shook uncontrollably from alcohol withdrawal, Frazer’s wife checked him into a detox clinic in his hometown of Clayton, Ohio.

Frazer was assigned to a room with another alcoholic, Frank Lee Hye, a one-time art teacher at the Flyshure Art Memorial in Philadelphia, who often in his fitful sleep would cry out “Hirshman!”. 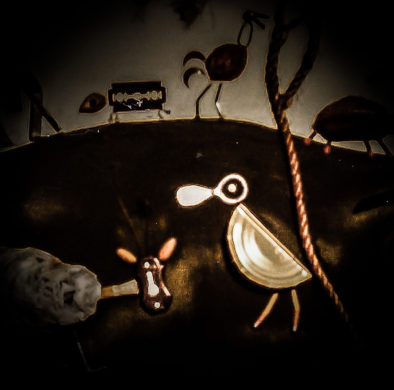 Another detail from Hirshman’s “On the Veldt” showing his first use of a pull tab.

The name belonged to Lou Hirshman, his colleague at Flyshure. Aside from teaching, Hirshman was renowned as a caricature artist of the famous, juxtaposing everyday objects for the effect. 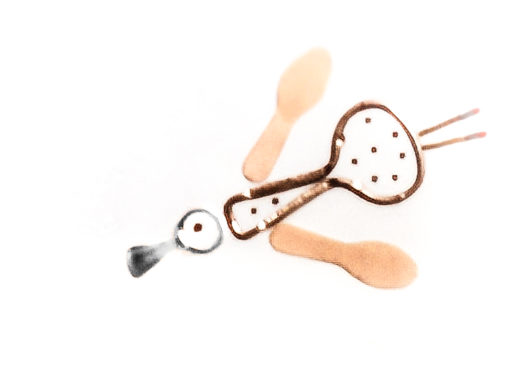 A detail from Hirshman’s “On the Veldt” showing his first use of a pull tab.

Now he had shifted his caricatures to stereotypes of everyday people. But when Hye, a recovering alcoholic, saw Hirshman’s unfinished “Garbageman” – a trash collector with the torso of a trashcan fashioned out of a flattened can of beer, with the rounded top forming manly shoulders, and a rusty can opener for the neck connected to large, silver ring-like washer for the mouth – he began to scream as the image of beer filled his brain. Hye ran to the nearest liquor store, where he bought a six-pack and thus returned to his life of drunken binges and retching hangovers, eventually ending up in the Clayton detox clinic where Frazer first heard the name Hirshman.

A STROKE OF GENIUS

A detail from “Circus Act” with pull tab.

Intrigued by his new knowledge of Hirshman’s work, Frazer immediately checked himself out of the clinic, caught a flight to Philadelphia and sought out the artist, finding him not at Flyshure but at home. Standing in Hirshman’s studio, Frazer could not tear his eyes from the nearly finished “Garbageman,” specifically the top of the can, the can opener neck and O-shaped washer mouth. Frazer – whose invention of a rubberized soft soft-drink can a few years earlier had been rejected by the Cocao-Cola Company, thus leading a shattered Frazer to his drinking problem – had a stroke of genius. He would invent the “Pull Tab” – an aluminum flap on the can lid that could be pulled off with a finger-sized ring.

Frazier instantly bought “The Garbageman” for $3,500, but made Hirshman sign an agreement that the artist would not use the pull tab or “its likeness” in his art for five years. Frazier stopped drinking, patented his

Detail from “Boy with Toy” with pull tab on a string.

perfected design and got very rich. And Hirshman, true to his word, waited until 1967 to unveil his collage “On the Veldt,” showing a grassland teeming with animals, including two birds, each sporting the head and beak of a pull tab.

But by the mid-1970s, governments around the world had banned pull tabs, which littered the landscape and were sometimes dropped in cans only to be swallowed. Suffering a financial catastrophe, Frazer began drinking again. Hirshman, on the other hand, enjoyed great success and happily kept using the pull tabs in his art until he died in 1986. 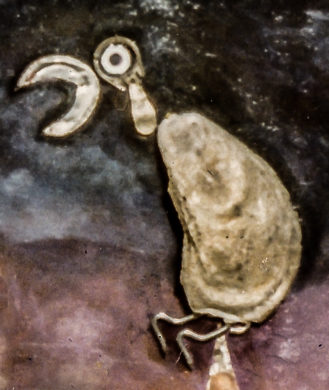 A detail from Hirshman’s “Triumph of Death” with pull tab.

Two years later, Frazer gave an interview to the New Cork Times. “I personally did not invent the pull tab,” he told the newspaper in a drunken stupor. “The credit should go the artist Lou Hirshman.” According to the report, Frazer lifted a can of beer in salute. “Here’s to Hirshman: the unsung hero of the alcoholic.”

Frazer died of liver failure the next year. Carved on the inventor’s gravestone, shaped like a pull tab, was a quote around the ring: “Life and death are nothing more than form and function – Lou Hirshman.”

Note: This post is a “fake” account. Apologies to the relatives of inventor Ermal Cleon Fraze (alluded to as “Frazer” in the post), who was never an alcoholic.