OF GROUCHO, THE HUMERUS AND A PENIS

In this second Posthumous Interview, more than 30 years after Lou Hirshman’s death, the irreverent comedian Groucho Marx – the subject of one of Hirshman’s finest pieces parodying one of filmdom’s funniest entertainers – comes to life as he banters his way through the artist’s take on humor. Groucho’s quirky quips meet Hirshman’s witty art.

GROUCHO: Before I speak, I have something important to say. Lou, I have nothing but respect for you — and not much of that. Isn’t it great to know that both of us were so creative except for one of us.

HIRSHMAN: Neither of us was creative.

GROUCHO: How dare you! I represent that remark! This means war! War, I say!

HIRSHMAN:  Don’t take it personally. What I mean is that I wasn’t creative because there is no such thing. It’s just a phony word that means nothing – especially in art.

GROUCHO: Still, art is art, isn’t it? On the other hand, water is water!

And east is east and west is west and if you take cranberries and stew them like applesauce they taste much more like prunes than rhubarb.

HIRSHMAN: My point is that I didn’t “create” anything. Like my caricature of Albert Einstein. I didn’t create him as a piece of art – just as he didn’t create relativity.

GROUCHO: That’s an interesting observation I wish you could forget.

HIRSHMAN: And that is the right word.

GROUCHO: Ah, yes. “To err is a human error, to forget is divine with me.”

HIRSHMAN: No, not the word “forget.” I mean your other word: “observation.”

GROUCHO: Next time I see you, remind me not to talk to you.

HIRSHMAN: Einstein’s theory of relativity was all about being observant, not creative. He was observant of the world around him; observant of his own mind; and, most of all, observant of where the two  intersected.

GROUCHO: Chico was once stung by an intersect.

GROUCHO: And if you meet a black

cat that crosses your path, it

signifies that the animal is going somewhere.

HIRSHMAN: Somewhere, yes. But where? Imagine two parallel lines just going on into infinity, never meeting. That’s boring. It’s only if they cross, do the possibilities present themselves – angles, points, degrees. That’s where art is. As an artist, that’s where my reality lies.

GROUCHO: I’m not crazy about reality, but it’s still the only place to get a decent meal.

HIRSHMAN: Personally, I think God created Man because he was bored with the concept of forever.

GROUCHO: I intended to live forever but I died trying. You know, either we’re dead or my watch has stopped.

HIRSHMAN: It’s also helpful to have a good “funny bone” if you want to be humorous.

GROUCHO:  Isn’t that funny? I once had a humerus from my shoulder down to your elbow.

HIRSHMAN: The humerus is humorous. If you hit your funny bone, you wince in a smile of pain. It’s sudden, unexpected, but still makes you laugh. A surprise of recognition – or maybe it’s the recognition of surprise.

GROUCHO: If you ever find it hard to laugh at yourself, I would be happy to do it for you.

HIRSHMAN: Take a look at my 1974 caricature “Bull.” If you study it carefully, you realize that the mad bull’s penis is a party favor, one of those toot-toot toys you blow at celebrations like New Year’s Eve. And here the surprise of recognition is that if you blew the Bull’s party favor, it would straighten out to a raging bull’s boner for feral bovine amour. 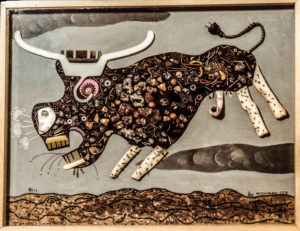 GROUCHO: I love my cigar, but I take it out of my mouth every now — 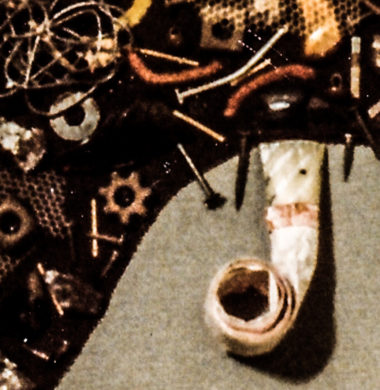 GROUCHO:  Sir, those are my principles, and if you don’t like them...well I have others.

HIRSHMAN: Oh, look at the time. Can you stay longer? We didn’t even get a chance to talk about the humor in my caricature of you.

GROUCHO: [singing]
I’ll stay a week or two
I’ll stay the summer through
But I am telling you
I must be — going

HIRSHMAN: Well, thanks for coming.

Hirshman: A face for Groucho to forget.

GROUCHO: You know, Lou, I never forget a face, but in your case I’ll be glad to make an exception. Seeing you was a lot like seeing you. And I’m glad we met so I can leave. I can leave in a huff. Or if that’s too soon, I can leave in a minute and a huff.

HIRSHMAN: Hope you enjoyed our conversation on humor.

GROUCHO: I had a perfectly wonderful time. But this wasn’t it.

(Editor’s note: While most of Groucho’s quotes are presented verbatim, some have been edited and several were composed by the author. Apologies to the ghost of Groucho).