THE SLAPPING BALLERINA WHO WASN’T HITLER 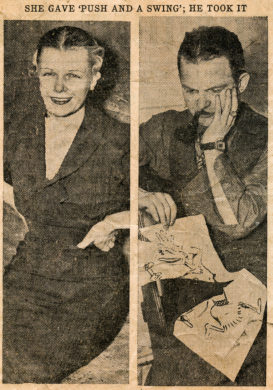 Slapper and Slapped: Littlefield (left) smiles while Hirshman winces from a sore cheek of criticism.

In 1937, Lou Hirshman created one of his most famous caricatures – Adolf Hitler – complete with a dustpan scoop of shit for the brown-shirted despot lying in a dirty gutter. Had Hirshman been under the Früher’s rule, the constructor of that construction would certainly have been arrested, tortured and made to stand before a firing squad.

A year after the Hitler caricature, another of Hirshman’s stinging renderings would also cause him to suffer for his artistic cleverness. Not a fatal Hitler shot to the heart, but a whack across his cheek from a slapping ballerina in a rage of wrath.

A SLAP AT ART

Hirshman, a member of Philadelphia Artists Union which was planning a May 7 costume gala called the Bal Masque, was working in his studio. Catherine Littlefield, the founder, choreographer and premier ballerina of 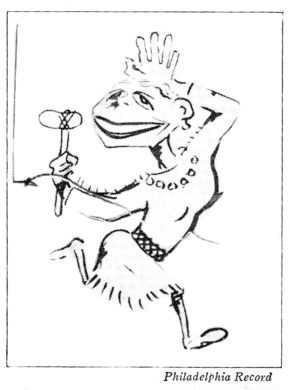 the internationally acclaimed Philadelphia Ballet, had gotten wind of an uncomplimentary sketch Hirshman had done of her – a pen-and-ink caricature of her dancing, not as a ballerina dressed in a tutu, but as a stomping Indian squaw with a tomahawk. Hirshman had made the sketch as a design for a 20-foot-tall papier-mâché figure for the Bal Masque.

The enraged Littlefield stormed into his studio accompanied by what Hirshman described as a couple of “big, husky brutes.” A United Press article reconstructed the scene as Littlefield bellowed:

“Where is that picture?” Hirshman looked at her companions and offered no resistance. With one quick movement, she tore the sketch in two and with another her right hand connected with his left cheek. “I didn’t mind the slap as much as destroying my sketch,” Hirshman said later, adding that he was doing it over. “That was a slap of art.”

OF LIMB FROM LIMB

In another report, Littlefield saw herself – not Hirshman – as the real victim, describing the caricature as a slap at “the big things I am trying to do” in ballet. 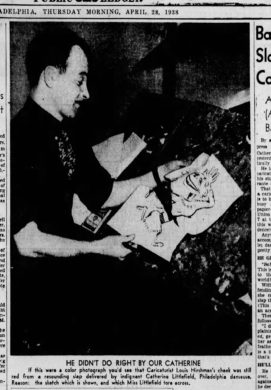 One report pegged Littlefield as “Kitty the Killer,” with another saying she “swings a mean right.” Time Magazine noted that in one published report, Littlefield contended it was a “half-swing” that was “more of a push.” But based on another report, the popular weekly magazine quoted the dancer as being less decorous. “My impulse is never to hit,” Time reported. “I incline to the tearing of limb from limb.”

The Philadelphia Evening Bulletin wrote that Hirshman intended to have her arrested. In the other city’s main newspaper, The Philadelphia Inquirer, a columnist went further:

Louis (He Who Got Slapped) Hirshman, the caricaturist, has retained Attorney David Serber to collect $10,000 in damages…for the hay-maker [Littlefield] delivered to his jaw.

The same columnist, sounding a bit dismayed in a later report that the slapper and slappee had undercut his scoops by mending fences, wrote:

The row between Louis (He Who Got Slapped) Hirshman and Catherine Littlefield…has been amicably settled, with an apology from the noted ballerina and all’s too, too ducky for the moment. 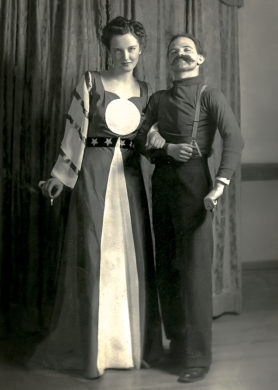 Don’t Cry, Cathy: Littlefield’s likeness may not have graced the Bal Masque, but Betty Hirshman (left), posing with husband Lou, was a Belle of the Ball with her prize-winning costume.

“Ducky” is an interesting word, insinuating that there may have been a cozy collusion between the two protagonists. Indeed, it is possible that all of the column inches the event generated were not based on a real occurrence, but rather a publicity stunt. Given Hirshman’s suit for damages of $10,000, equal to an incredible $170,000 in 2017 dollars, such an event would seem more apocryphal than actual. Perhaps the alleged act was only meant to benefit both Littlefield’s ballet company (it closed down in 1941) and the planned Artists Union’s Bal Masque. The group of artists with a mere 100 members was able – reportedly – to pull in 2,500 guests for the May 7 costume ball.

Whether the ballroom was graced by the large papier-mâché figure of Littlefield, as had been Hirshman’s stated intention, was not mentioned in any reports. And if it was actually constructed, whether it won one of the prizes is unknown. The only certainty is that Hirshman’s wife Betty was awarded a prize for her costume portraying Liberty.

But if indeed this 1938 event was real and Littlefield’s enraged hand had actually reddened the cheek of the witty artist known for his no-holds-barred parody of the famous, Hirshman might have taken solace in one thing. A slap by an affronted ballerina is far less deadly than the vengeful sentence of a mouth-foaming Früher.