POSTHUMOUS INTERVIEW #1: The Duel and the Struggle of Love

This is the first in an irregular series of posthumous interviews that Hirshman’s son conducted with his father more than three decades after the artist’s death in 1986.

SON: I appreciate you taking the time for this interview.

LOU: Time is what I have. What do you want to know?

SON: As this is the first of our Posthumous Interviews, I thought I would start off very basic. Can you articulate what an artist loves?

LOU: Look, I was simply an artist who wanted to work in his studio.

SON: So you loved your studio?

LOU: The studio was only a place. I loved that place in the mind, in the spirit, where sight fights sight. I loved the struggle.

LOU: [long pause] Do you remember my collage “The Duel“?

LOU: Yes. Two swordsmen, outlined in flowing string, facing off in battle. The foils were a pair of children’s scissors.

LOU: Those were your scissors?

SON: I was intrigued to see them in “The Duel”.

LOU: They intrigued me as well.

SON: “The Duel”. That was one of your serious pieces, wasn’t it?

LOU: It was my first serious piece

LOU: That’s right. I had done caricatures of the famous for so long. At first, I craved the raves. But at some point all of the praise seemed superficial. My work had become no more than a joke.

SON: Your caricatures were wonderful.

LOU: To everyone but me.

SON: What do you mean?

LOU: I was trapped as an artist. People only saw me as a one-trick pony.

SON: So you stopped?

LOU: I did a few pieces over 20 years. But, yes, I basically stopped.

SON: I still don’t understand why? What did you do? 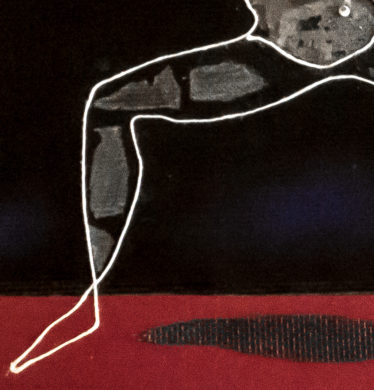 deeper and deeper into the eastern philosophers. I was trying to find my sight, the spirit of vision. As part of that, I avoided the physical act of art, concentrated on what the philosophers had to teach about sight. And while their wisdom was teaching me, I was teaching art at an art school.

SON: But not doing art.

LOU: It was a time of artistic struggle.

LOU: Yes, it was an inner struggle.

SON: What do you mean?

LOU: Did you ever notice how similar the duelists in “The Duel” were, with their matching button faces?

SON: Well, no, but now that you mention–

LOU: They were me, two swordsmen, with blank stares, locked in an eternal battle – of sight. And the two parts of the scissors, fixed at the fulcrum, meant they were never, ever to separate. That’s how I felt.

SON: So the duelists were two parts of you?

LOU: It was me fighting me.

SON: You never said you loved me.

LOU: I know. [long pause] But there can be love in struggle.

LOU: Not in words that slip through the lips, but in the vision seen by the eyes and the spirit of shapes. It was like the duelists. They fought, inwardly, externally and eternally. But they were like father and son – they may have been at crossed swords, still they loved each other.

SON: So like you and me, in a struggle of love.

LOU: Yes. A struggle of love.