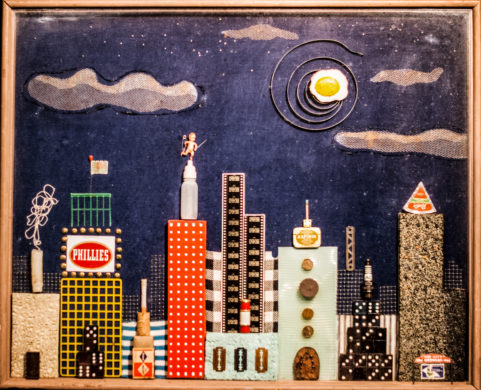 In this cityscape, the artist made his hometown of Philadelphia the subject, evident by his use of a “billboard” Phillies logo for a brand of cigar originally locally produced. Also the miniature-sized baby atop a skyscraper is a Hirshman joke on the Philadelphia City Hall constructed in 1901 and topped with a statue of  William Penn, the Quaker founder of Pennsylvania, the state in which Philadelphia is located. While not legally mandated , there was an understanding till 1987 that no other building would be constructed taller than Penn’s hat.

The building to the right of City Hall is made in part from filmstrips of a MOVIETONE Newsreel, flipped vertically and horizontally, which oddly reads: “Mike Todd Plunged to Meteoric Death Wreckage Reveals.” Todd was a movie producer, married to actress Elizabeth Taylor, who died in a 1958 airplane crash.