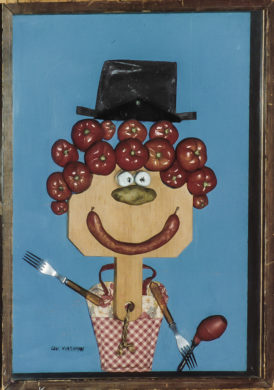 Like Hirshman’s artistry, Harpo Marx’s on-screen genius was the humor of silence. Some of the actor’s sight gags revolved around food, which Hirshman alluded to with a face full of edibles – Harpo’s tomato hair, potato nose and sausage mouth, which as perishables, Hirshman had to “make” in his studio. Even the flies for Harpo’s cross-eyed stare were created by Hirshman.