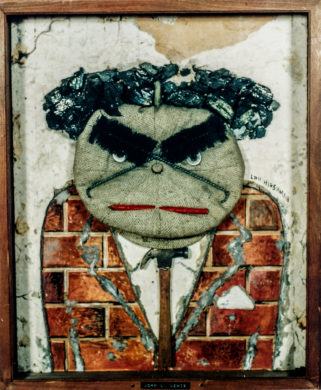 As the economic woes of the 1930s continued, the adjective “Great” was added to the term “depression.” Although Hirshman worked alone, he was nonetheless, at least in his younger years, a supporter of unions. And in terms of personalities, “union” meant John L. Lewis, the hero of the (non) working man. Lewis’s hair of coal was a reference to his unionizing of coal workers; his cap face a Hirshman tip-of-the-hat to his connection to a union of millinery workers; a hammer tie for his ties to steel workers; and his bushy bottle-washer eyebrows perhaps relating to his union work with glass workers.

But most prominently in Hirshman’s interpretation of this no-nonesense organizer was his portrayal as a hard wall of man, a choice that reveals a little personal inside joke: over Lewis’s left shoulder is a bit of penciled graffiti (although hard to see in this low-resolution photo) with the phone number and name of Hirshman’s future wife, 19-year-old Betty Price.