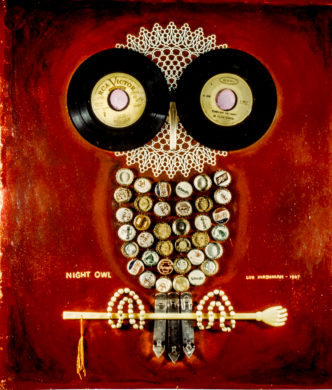 Though never Hirshman’s objective, many of his pieces serve a historical/archeological function. “Night Owl,” a mesmerizing bird sitting on a backscratcher perch, includes two 45 rpm records for eyes. These were small disc formats, usually with just one song, played faster than the larger 33 1/3 rpm albums with small holes. While the latter are still manufactured for purists and disco DJs, the former are relics popular in the 1950s and 1960s. In this artwork, the right 45 is the song “Turkish Delight,” a 1963 folk-dixie instrumental by The Village Stompers.

The collage also includes a double-purpose item for the owl’s tail – the churchkey. It has a bottle opener for caps (such as the assortment of brands that populate the bird’s body) still in use. And a sharp end, no longer to be found, used for making two triangular holes in soda and beer cans – one for drinking through, the other an air vent for allowing the liquid to flow smoothly.