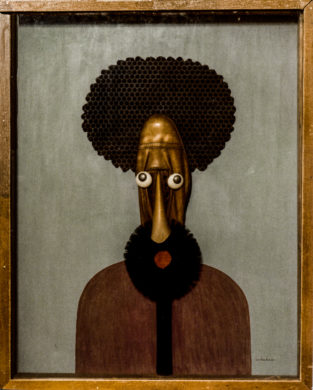 As with many of his caricatures, especially of the famous, Hirshman was able to breathe life into his subjects with an economy of items. In the case of Haile Selassie, the oft-photographed emperor of Ethiopia, who in 1935 was trying unsuccessfully to fight off the Italian military, Hirshman was able to capture him with just four objects on a sparingly painted background – a rubber mat, a shoe, ping pong balls and a toilet brush.

Unlike pen and brush caricaturists, who have the two-dimensional luxury of exaggeration with a stroke of the hand, Hirshman had to find the forms of things in a three-dimensional world to do the work. And it worked for those living in those frightening times who knew the story of Selassie.