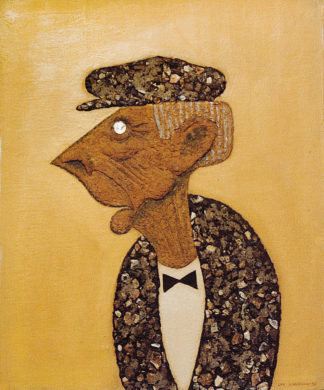 In 1935, John D. Rockefeller was the richest man in US, having made it big in the petroleum business with Standard Oil. As the Great Depression strangled the nation in the 1930s, the 30-year-old Hirshman found the first subject for his caricature period. Here was a capitalist of the first degree whose wealth contrasted starkly with the economic woes of the country and whose profile was ripe for the drilling of Hirshman’s wit. The rock shale of Rockefeller’s cap and jacket was an oily pun on his name. His taut skin in slight relief was “carved” out of a sandstone-like material of Hirshman’s own making. The result was a stone-cold visage in profile, immediately recognizable in this era of poverty as Rockefeller, surrounding the focal point of this well-heeled subject – a dime for an eye.