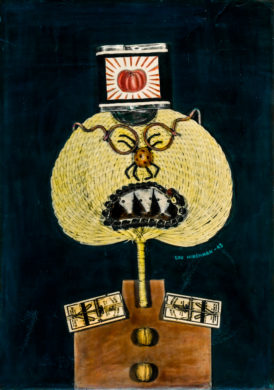 The often uniformed wartime Japanese prime minister and general Tojo, who had ordered the attack on Pearl Habor that initiated the US entry in to World War II, was given the nasty torture of Hirshman’s satire – a traditional Japanese fan face, spider nose and snake glasses, mousetrap epaulets, all topped off with a drawn tomato replacing the Rising Sun of the Japanese flag.

This is the only known caricature Hirshman made during the war.