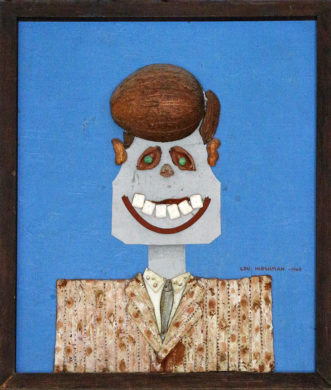 Whether due to his politics or boyish good looks, John F. Kennedy charmed just enough of the electorate to win the US presidency in 1960. After the scare of the Cuban missile crisis of 1962, when the world came closer to nuclear war than ever before, in the next year Hirshman gave Kennedy a makeover in which the caricaturizing parts may have had little to do with the president’s character, but certainly captured his look to a tee – swept hair of a (real) coconut, angled eyes of almond half-shells and teeth of Chiclets, a brand of gum with an enamel-like candy coating. The cut of his suit gets back to Hirshman’s Yiddish roots. Although a non-practicing Jew, he loved Matzah, a ritual Passover food of unleavened cracker-like flatbread, which he preserved and used to great effect for Kennedy’s jacket. After Kennedy’s assassination, Hirshman removed the piece, displayed for friends and family to enjoy, from his living room wall, never to be seen in public again.