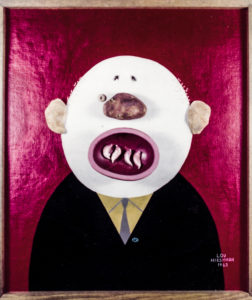 In 1963, the most recent Hirshman caricature of a public figure was his 1956 portrayal of Charlie Chaplin. But with the Cold War between the West and East having cooled down the previous year when it threatened to become a hot one, President Kennedy, Cuba’s Fidel Castro and Soviet Premier Nikita Khrushchev were in-the-news leaders too ripe for caricature for Hirshman to ignore. His rendering of Khrushchev was an exercise in simplicity, requiring just a minimum of objects to bring the Soviet boss to life. While hard to recognize in this photo, his mouth is the head of a plunger (also used in Hirshman’s caricature of Mussolini) and the ornament in his lapel included the hammer and sickle of the Soviet flag.