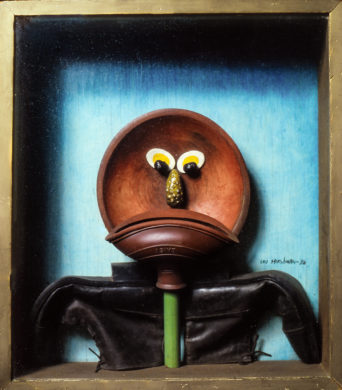 With a deportment that almost made him a caricature of himself, Italian fascist Benito Mussolini was tailor-made for Hirshman to parody in the days of pre-war Europe. Among the handful of shapes to ape the Hitler ally – the boots of war, a spaghetti bowl face – is a scowling plunger. A close-up of the plumber’s helper reveals the upside-down name of the manufacturer – “Daisy.” This may have been a Hirshman inside joke referring to Countess Daisy di Robilant, a wealthy feminist and fascist supporter of Mussolini who served in Il Duce’s regime but became increasingly critical of its disregard for feminist reforms. Mussolini fired her in 1936.