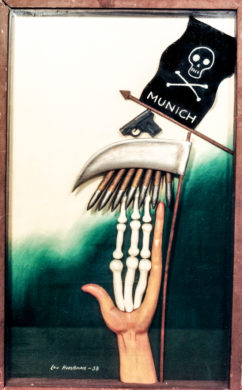 Neville Chamberlain was Britain’s prime minister in the years leading up to World War II. The politician is known – most would say “loathed” – for his appeasement to Germany’s Hitler by signing the Munich Agreement in September 1938 which led to Germany’s annexation of the Sudetenlands of Czechoslovakia. A year after this caricature, Hirshman did a second version, implying he was not satisfied with this rendering. Indeed, with its motif of bullets and bones, the piece appears to be more about propaganda that parody.