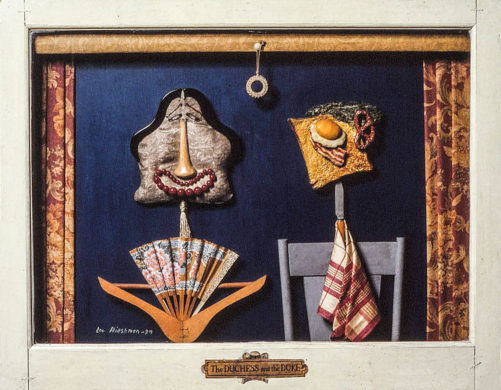 In 1936, after the death of England’s King George, his son Edward, the Prince of Wales, took the royal reigns. But the heir to the throne was destined to last less than a year as a scandal of constitutional proportions grew due to his wife-to-be, American socialite Wallis Simpson. She was already divorced once and getting ready for her second. In the name of love, Edward abdicated and in June 1937 married Simpson. The pair was given the newly-created title of the Duke and Duchess of Windsor.

Hirshman had found his next subject. He took a step back to January 1936 when the prince and his love, the future Duke and Duchess, ignored protocol by observing the accession proclamation from a window at St. Jame’s Palace – satirized by Hirshman’s window-framed caricature and Edward with a head of toast, a sly reference to a comic strip character of the day – wimpy and weak Caspar Milquetoast.