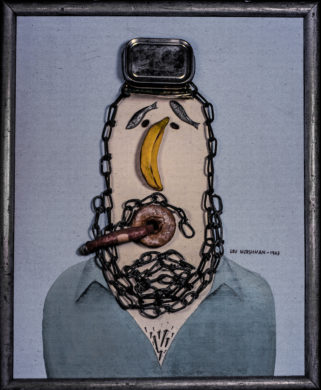 Fidel Castro, who  – depending on one’s politics was either the people’s revolutionary leader or strong-arm dictator of Cuba – had often been the target of the US. But in 1962, the US was in danger of becoming the target of Cuba, and by extension, the Soviet Union, which had secretly been shipping nuclear missiles to the island nation off of Florida’s shore. In the holocaustic troika of Soviet premier Khrushchev, President Kennedy and Castro, the Cuban leader himself became a target of the Hirshman wit. Except for a Jewish bagel for a mouth, all of the objects hit his popular image like a nail on the head – banana republic nose, sardine eyebrows for the small fish Cuba against the US shark (although a close-up of the sardine cap shows they are from Maine), sausage cigar and the outlined face and beard of chains.