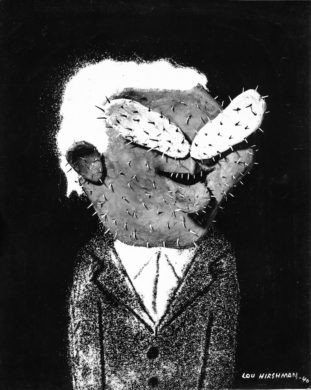 US congressman John Nance Gardner served as President Franklin D. Roosevelt’s vice president starting in 1932,  but broke ranks during their second term, when he considered going up against Roosevelt if he went for an unprecedented third term (Roosevelt did and won). Hirshman used his nickname “Cactus Jack” to portray the snow-white haired Texan with a face of the prickly plant common in his home state. Hirshman meticulously populated his self-made cactus with nearly 100 sharp protruding thorny-like toothpicks and nails. Garner was despised by another Hirshman caricature, labor leader John L. Lewis, due to the politician’s anti-strike views.