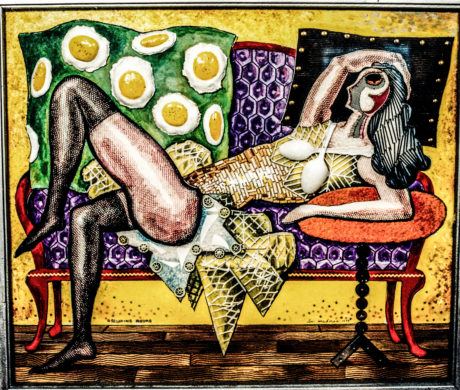 In part, what made Hirshman special was a wit, while often humorous, sometimes was a wit of the serious and a reason for reflectivity. At first sight, “Reclining Figure” is something that Picasso or Gauguin might have created. Except for the eggs sunny-side up (a studio-based recipe he often used) and perhaps the spoons for breasts, the parts of the piece meld together so well that it becomes an artwork of paints and colors. Finding the nails, the bars of plastic containers, the angle bracket, the buttons, the little cog wheels does not matter. They are all just shapes that Hirshman, who never used models in his studio, saw as a temptress.

As seen in the woman’s tight-fitting top, this was Hirshman’s first time using small tiles glued close together in a mosaic, almost like pointillism (although he used a similar technique in his very first caricature in 1935 with the shale rock in “John D. Rockefeller“), a style he would employ for many of his pieces till his last artwork.