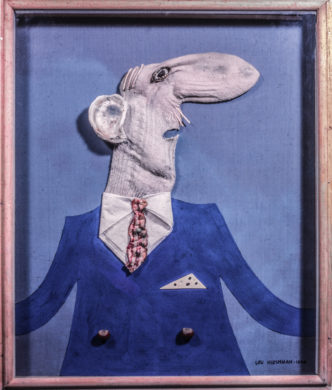 Wartime French general Charles de Gualle once gave a speech after losing a 1951 election. “Nobody,” he purportedly said, “can simply bring together a country that has 265 kinds of cheese.” But when the famed Frenchman was later elected president, Hirshman, who had probably never heard of the possibly apocryphal quote, created a caricature that was a perfect match for such a de Gaulle goal. He portrayed the big man with his prominent nose as a cheese-loving rat in profile, a point made by a triangular slice of cheese (albeit with the holes of the Swiss variety) sticking up from his suit jacket pocket like a handkerchief.

The construction’s creation gave no hint to the fact that this was to be Hirshman’s last-ever caricature of a public figure.